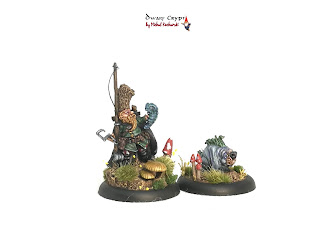 "A few hours fishing by Silverlake will do you immeasurable good (not you; quit wriggling and get on this hook!)" Hello everyone! I received a package with  Kickstarer   models from  Midblight Miniatures  last week. The models look awesome and are full of great details and fantasy atmosphere! The main responsible for these GREATNESS is the legend sculptor - Paul Muller (Games Workshop [e.g. perfect models for Mordheim's Witch Hunters], Privateer Press, Heresy Miniatures, Otherworld Miniatures and many, many more!). Today the first model (and the bonus of a pig-like creature in thanks for participating in KS) bearing the name Nils Hodsen. As Paul told me:  sorta named that one after my old 'Eavy Metal team friend :Nils Odsen/Neil Hodgson "Kilka godzin wędkowania na Srebrzystym Jeziorze da ci niezmierzone dobro (nie ty; przestań się wiercić i wchodź na ten hak!)” Witam serdecznie! W zeszłym tygodniu przyszła do m 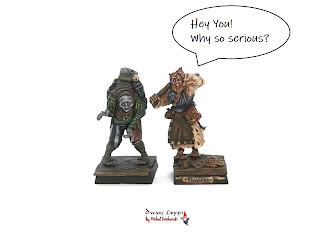 Hello everyone! Article dedicated to Ghouls today, creatures derived from legends and permanently domesticated in today's fantasy. I used a recently painted resin Ghoul model from  Rotten Factory , which will be joining my nascent Undead band to Mordheim . Let me just remind you that the Kickstarter of Rotten Factory (which already has over 200%!) Is underway, in which you will find many great models of Undead, Barbarians, Cultists and more. I WOULD HIGHLY RECOMMEND! G houl, ghoula (Arabic: غول) - in the beliefs of pre-Muslim Arabia, the ghoul was identified with the evil spirit of the desert (also appearing in other isolated places, for example in cemeteries), a demon, usually of a female type, derived from Arabic folklore.         Ghouls lured, attacked and killed travelers (usually then devoured their victims) and robbed graves of the dead (hence the word ghoul also refers to grave robbers). They appeared in the form of animals (mainly hyenas), monsters or witches. Witam wszy 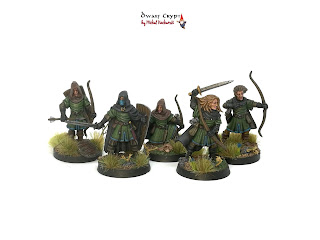 Hello everyone! The second part of the entry of Gildor Inglorion, whom Frodo meets twice on his way in The Lord of the Rings books today. Again I reached for models for  Oathmark: Battles of the Lost Age , but this time from a plastic box of lightly armed elves. The first part of the entry AT THIS REFERENCE . T he question has arisen of the identity of this character. Gildor calls himself "Gildor Inglorion of the House of Finrod." He also says: "We are Exiles, and most of our kindred have long departed and we too are only tarrying here a while, ere we return over the Great Sea." At the time when The Lord of the Rings was written, Finrod still meant the character later known as Finarfin. If we read "House of Finrod" to mean "House of Finarfin," we can place him among the Ñoldor who joined the host of Finarfin during the Exile, and came to Beleriand under Finrod Felagund.        Some argue that the name "Inglorion", which means "So