The Skaven, Ratmen, the Ratkin, the "Children of the Horned Rat #1 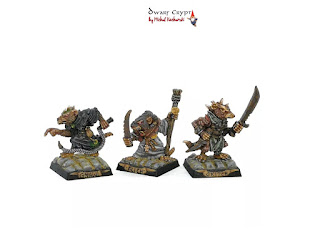 After many, many years I'm coming back to painting Skaven.
I have some very old models that I would like to finally paint and add to the oldhammer collection.

For today's post I have prepared two models from 85 and 87, sculpted by the legendary in the world of Warhammer minis, Jes Goodwin (Rats painted by me in 2018).

These are two Ratmen, a Skaven clanrat - a warrior belonging to one of hundreds of clans, and a Plague Monk (although a great fit for the Gray Seer).
Modelers - rarities from the Oldhammer period, defend themselves after more than three decades with their atmosphere and grotesqueness.

To this pair I added another, this time a few years younger Skaven. Originally, if I remember correctly, it was a beast/rat master who whipped a bunch of rats.
I bought it without them, but it fits perfectly with the gang even in this form.

This year I will also try to paint the other three miniatures- also old and beautiful!

SkavenThe domain of ratmen is a network of underground tunnels and cities whose existence is hidden in a deep mystery. Practically none of the people living on the surface have a clue what is happening under his feet. In the human Empire, there is a common adage that Skaven are an urban legend that is haunted by naughty children. They became characters from legends and folklore.        But they exist and use the warpstone, which is the essence of change and pure chaos.The Slaven's Gray Seers use the spells of warpstone for casting powerful spells, and the engineers create infernal war machines that engulf horror, destruction, and plague. This substance occurs naturally, in any form in the Old World, and contact with it often causes immediate mutations.
The most important leadership body in Skaven race is the Thirteen Council. It includes the most influential representatives of the rat race, also called the Thirteen Lords of Decay. Council proceedings take place at a rectangular table, with clearly designated seats depending on the influence of individual members. One seat at the table is empty.This is reserved for Horned Rat, Skaven's God, who symbolically takes part in the deliberations. The Council of the Thirteen very often changes its composition as a result of intrigues, murders and betrayals.And this is what best defines the character of the Skaven, and the distrust of the fellow countrymen leads to wars.
The Skaven society is divided into clans, but the most important of them are the Four Great Clans:The Eshin clan from which the elite assassins originate.Clan Moulder, Master Vats, creating his army of terrifying beasts - mutant rats.Clan Skryre, who has sorcerers and engineers in his ranks who use warping in contouring their inventions.And the Pestilens Clan, from which today the Plague Monk, painted today, is a clan that infects the plague of Above and Below the earth. In the villages and cities of the Old World. In Latin, "Pestilens" means an epidemic... 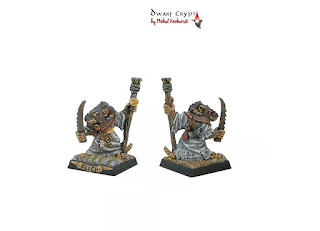 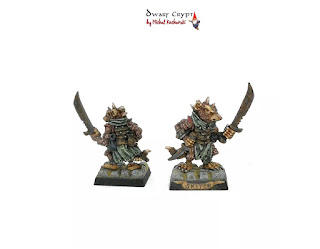 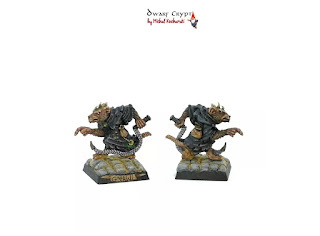 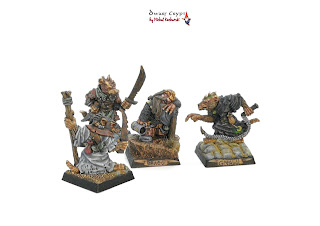 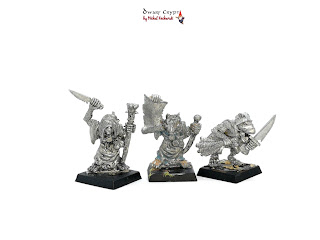